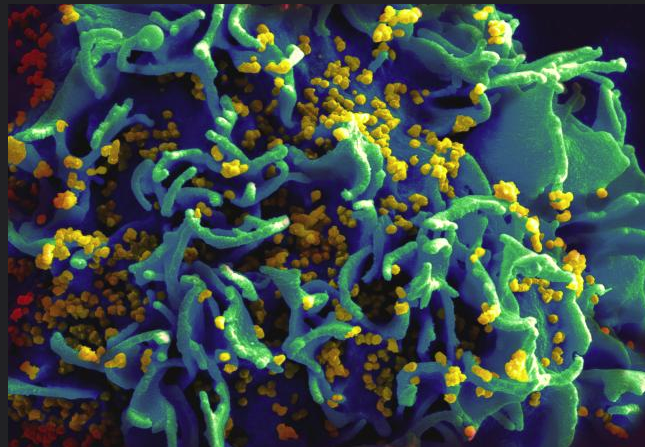 A Cup of Coffee – HIV/AIDS It's not over

Welcome back! Last week we talked about alcohol and it’s effects on our livers. If you missed that blog and would like to catch up, click HERE.

This week we are going to tackle the subject of HIV/AIDS. Many people would tell you that it’s a disease that only affects gay men, or that it’s “over” and we’ve passed the crisis mark. Some even think it was eradicated. It wasn’t. In fact, the CDC reports that “An estimated 1.1 million people in the United States had HIV at the end of 2016, the most recent year for which this information is available. Of those people, about 14%, or 1 in 7, did not know they had HIV.” (photo of HIV-infected H9 T cell)

You may wonder how the CDC can come up with statistics that aren’t even reported. After all, if you don’t know you have HIV, then how can you report it? I wondered the same thing, so I did the research for both of us.

So now we know it’s out there. Who are the people contracting HIV? Is it really just gay men, IV drug users, or both? The answer is NOPE. Thanks to the CDC, we also have this lovely graph to help us wrap our head around the answer.

Wow. A full 24%, almost a quarter of the whole, are Heterosexual people, and while you obviously can see that the gay population is still hit very hard by this virus, you can no longer say it’s a “gay disease“.

So let’s talk about the numbers. We have a breakdown for you that reveals state to state percentages of HIV diagnoses.

I’m sure at this point some of you are confused. You thought only gay men contracted HIV. You are asking yourself, how do “straight people” get HIV? You didn’t think this could affect you or your children, and now that you know it can, you are worried.

Here is the information you seek.

Don’t like to watch videos? I get it. Here’s the fast facts:

HIV doesn’t live outside of the body. The very second it hits the air, it’s dead. This is why sneezing, coughing, kissing, and sweating don’t pass the virus. Go ahead and hug your loved ones that have an HIV diagnosis. Feed them, ask them to spend the night in your guest room when they are overwhelmed. They need you.

As of 2016, about 675,000 Men, Women, Non-Binary people, and Children have died of HIV/AIDS in the U.S. since the beginning of the HIV epidemic. With improved treatments and better prophylaxis against opportunistic infections, death rates have quite significantly declined.

If you haven’t been tested, get tested. You may be one of those walking around infected and you have no idea. Knowledge is power. Let’s keep these numbers declining, and hopefully, eventually, a full blown cure will be found.

Until then, take good care of yourselves and each other.