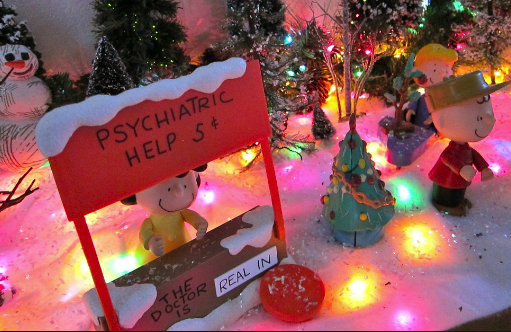 A Cup of Coffee – Is It Right To Lie To Children About Santa?

Welcome back! Last week we talked about Movement Therapy and Anxiety. If you missed that blog and would like to catch up, click HERE.

Have you ever found yourself worrying about telling children that Santa is real? I know some of our readers have, and they’ve reached out regarding this topic, so we are going to do two things here today. 1. Look at the evidence and 2. Talk about the word “real”.

In my small home town, I have an annual program called, “Letters to Santa”. I put festive mailboxes in several small businesses, and children from all over the state and even out of state, write to Santa. I dress up as Canby’s Elf #314, deliver the mailboxes the day after Thanksgiving, and then spend the next three weeks or so collecting letters and writing back as Santa himself. This year I was even involved in the Christmas parade that snaked through town, ending up at our city park, where the switch was thrown, the park lit up, and Santa and Mrs. Claus met with every single child to listen to them, hug them, and give them some treats.

As I rode on the fire engine throwing candy to the children in the streets and watched Santa wish them all a Merry Christmas, I battled in my head. “Is this right?” and “What happens if they find out my elf ears aren’t real?”. Then, my attention was drawn to a child who was staring at my hat as it danced, seemingly on its own, singing the song, “We Are Santa’s Elves”. Her mouth was open, her eyes were bright, and her amazement captivated me. She really believed.

In a world where children often grow up way too soon, where their lives are filled with stress and uncertainty, for that one moment in time, her imagination was triggered, and she believed in the unbelievable. She was allowed to be a child. Innocent and pure, no strings attached.

I can remember being a child and playing with my dolls. I fed them, burped them, and put them down for naps. There was never a day when I said to myself, “these dolls aren’t real”. I simply put them away one day and never brought them out again.

Similarly, I don’t remember ever realizing that Santa wasn’t real. There is no certain date in my head where I remember pointing to my parents and announcing, “Liars, all of you!”. One day, Santa just wasn’t “real” anymore.

Every year, I receive a few letters from children who are starting to realize that maybe, just maybe, this is all just a fantasy. Maybe Santa isn’t “real”. My letters to them are always quite lengthy, but my response is the same.

“My Dearest Tommy, Thank you for your letter. It made my heart smile. Yes, Dear Heart, I do realize that your friends will be telling you I’m not real, and I’m sorry about that. You see, Tommy, Santa is as old as Love. I’m sure your friends love their family, they love their friends, they love their pets and even spaghetti! Yet, how many of them have ever seen Love? Even though you can’t see Love, you still know it’s real, don’t you? Tommy, Santa is like Love. As long as you believe in me, I will always be there, tucked into your heart.”

Interestingly enough, I also get letters from teenagers and adults. They question why the world is so evil, and why we can’t have world peace. I even get parents lamenting the abuse their children have experienced at the hand of a now absent parent, or parents with abuse issues of their own. It would appear that in this sometimes jaded world, even adults need to be allowed to believe in Santa.

So there you have it. That’s the “real” part I spoke about at the beginning of this blog. Now for the evidence-based information.

If you are still interested in the clinical opinion of someone with a Ph.D., you may click this link: https://www.psychologytoday.com/us/blog/the-baby-scientist/201612/why-its-ok-kids-believe-in-santa-claus Spoiler alert: She thinks it’s fine.

As for me and my house, well, let’s just say Santa has over 30 more letters to answer before he and his reindeer fly!

For those of you who like to read math books, books on quantum physics, and play with graph paper, this video is for you. Enjoy…and for those who celebrate this holiday, Merry Christmas!