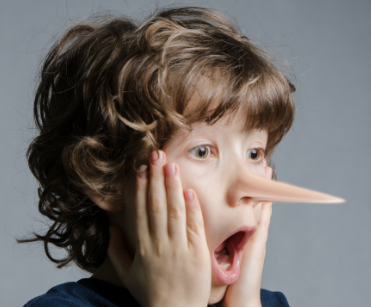 A Cup of Coffee – Is Your Child Destined To Be A Pathological Liar?

Welcome back! Last week we talked about a new hygiene hub in Portland Oregon. If you missed that blog and would like to catch up, click HERE.

I think we’ve all been there. You are telling the truth, and the person you are talking to says, “I don’t believe you” or even worse, “you’re a liar”. OUCH. If you are like me and value your integrity, this type of response can initiate a very negative response. For me, it’s ugly crying. I hate that I respond that way, but it’s the way it is. I get angry, and instead of responding with my words, I ugly cry. Have you ever tried to respond to someone in between sobs? Yeah, it’s not too convincing. I don’t recommend it.

So why do people lie, when the simple act of being called a liar is so painful? Let’s chat.

I remember when my kids were little and one of them went through a phase of, let’s just call it, “fudging” the truth. There were many times it wasn’t just an outright lie, but a “lie by omission“. So because this can get squishy, let’s begin by defining a lie.

Webster can help us out with this one: “To make an untrue statement with the intent to deceive“.

Great. Now we have something to work with. Next question is “why do people lie?“.

The Paul Ekman Group says this about that: “People resort to lying for so many different reasons that it’d be impossible to list them all. However, of the most common motives for telling lies, avoiding punishment is the primary motivator for both children and adults. Other typical reasons include protecting ourselves or others from harm, maintaining privacy, and avoiding embarrassment, to name a few.“.

For example: “I didn’t realize I was going 55, officer”. “My leg hurts so I couldn’t finish my chore mom“. Trying to get out of being punished compels many to lie. So back to when my kids were little (you thought I got distracted and wasn’t going to come back to this, didn’t you?).

I was in the kitchen stirring brownie batter. I left to run to the restroom and came right back. In those two minutes’ time, my toddler had taken the bowl to the floor, and I walked into the kitchen to see both my kids’ faces covered in batter, along with the family dog.

I took my daughter to the bathroom and before I cleaned her face, I asked her “who ate the brownie batter?“. She didn’t answer me. I then held her in front of the mirror and repeated the question. She stared at herself in the mirror and said, “doggie did it“. Mind you, I didn’t punish my children in the way most do. I didn’t spank. I didn’t sit them in the corner. They were only 2 and 3. It was a learning opportunity…and yet, she bold-faced lied. In the face of her own evidence…she bold-faced lied. So is this a biological gift? Thankfully, not most of the time.

My research showed that children don’t understand reality is fixed. Have you ever hoped you could change something just by wishing it so? Children not only hope for this, but they believe it’s a possibility. Until about age seven or eight, children often see a blurry line between reality and fantasy and don’t know that reality is permanently fixed. So when they say they didn’t do it, what they mean is that they wish they didn’t do it and are trying to make that true. This is what makes them believe that Unicorns are real and that Santa brought them toys. It’s a delightful time in their development. Adults on the other hand…

In a study published in Nature Neuroscience, Tali Sharot from the department of experimental psychology at University College London and her colleagues devised a clever study to test people’s dishonest tendencies while scanning their brains in an fMRI machine.

They found that when people were dishonest, activity in a part of the brain called the amygdala—the hub of emotional processing and arousal—changed. With each scenario, the more dishonest the participant, the less activated the amygdala was on the fMRI. That may be because lying triggers emotional arousal and activates the amygdala, but with each additional lie, the arousal and conflict of telling an untruth diminishes, making it easier to lie.

Sharot also found that the amygdala became less active mostly when people lied to benefit themselves. In other words, self-interest seems to fuel dishonesty. We see this a lot with politicians and spouses who engage in extramarital affairs. Here’s the biggest problem with these types of lies…they are like mice. Where there’s one, there’s more.

The study goes on to say that the researchers were even able to map out how each lie led to less amygdala activation and found that the decrease could predict how much the person’s dishonesty would escalate in the next trial. Biology seems to back up the warnings parents give to their kids: that one lie just leads to another.

So what happens when someone then becomes a serial liar, also known as pathological lying or compulsive lying?

Healthline had a very inclusive article on pathological lying. While we don’t really know why this happens, we suspect that the following reasons may create pathological liars: Compulsive lying is a known trait of some personality disorders, such as antisocial personality disorder. Trauma or head injuries may also play a role in pathological lying, along with an abnormality in hormone-cortisol ratio. So how do we know the difference between a white lie or a serious problem?

The following are some signs that may help you identify a pathological liar:

“George” who spoke to me on the condition of anonymity, was diagnosed as a compulsive liar last year. George went into therapy and has this advice for others, “Get help. It doesn’t have to be this way. Unless you have an antisocial diagnosis, which I understand to be more difficult to treat, you can learn how to tell the truth. In my case, I was raised in a family that was super strict. If you did something wrong, even if it was an accident, you got whipped. One day, I was visiting my friend, and her mom caught us in a lie. Her mom basically said that as long as we told the truth, we would still get in trouble, but the consequences would be half what they would be if we lied. I remember thinking that was super cool of her to say that. I wished my dad wouldn’t have been such a harsh disciplinarian because all I took away from his punishment was that if you don’t want to get punished then you need to become a really good liar. It almost ruined my life. Trauma therapy has brought me to a new understanding of myself and my behaviors. I highly recommend it over the traditional ‘talk therapy’, which I also tried, but didn’t find success after several sessions. This therapy started to help me after the second appointment.“.

Clearly, the reasons one lies are many and layered, and there are no “for sure” answers, but one thing we know is that lying destroys trust, it can end a relationship, and it can bring a family into chaos. It’s never a good idea to lie, and once on this path, it takes a professional intervention to get back on track. If you, or someone you love (especially a child over seven, as early intervention is important), display these traits, get help today. Don’t suffer, not one more day. You deserve a good life and to feel proud of yourself and your integrity. If you can’t do it for yourself, do it for those who love you. It’s never too late to start over.