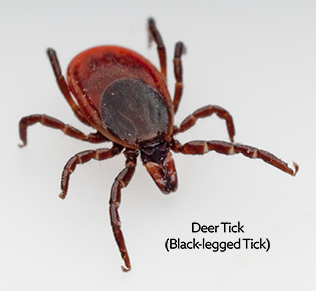 A Cup of Coffee – Lyme Disease

Welcome back! Last week, we talked about a rare disease known as Dermatomyositis. If you missed that blog and would like to catch up, click HERE.

This week, we are going to tackle the subject of Lyme Disease.

Lyme disease and Lupus both start with the letter L, and that’s not the only aspect they share. In fact, many Lyme disease symptoms may present themselves as lupus and vice versa. That’s why it’s important to be aware of their distinct differences in order to properly treat either condition.

Lyme disease is caused by a tick bite, which transmits bacteria causing infection.

Lupus, on the other hand, is a chronic inflammatory autoimmune condition, meaning that the immune system attacks itself and other organs in the body. We will be posting a blog about Lupus in the near future, so stay tuned.

The Public Health Division in Oregon says this about Lyme Disease:

So what IS Lyme Disease?

Lyme disease is caused by a bacterium, Borrelia burgdorferi, spread through an infected tick’s bite.

How do we contract this disease?

The most common ticks to spread the infection are

Ticks can attach to any part of the human body but they are often found in hard-to-see areas such as the groin, armpits, and scalp.

According to the CDC, it’s important to know that the tick usually must be attached for 36 to 48 hours or more before the Lyme disease bacterium can be transmitted. One European study documented six cases of culture-confirmed Lyme disease where tick attachment was less than six hours, and another nine cases where transmission occurred in under 24 hours. This is why it’s so important to do a tick check after coming home from an outdoor event, whether it be hiking, geocaching, hunting, or reunions in State Parks. You don’t want to allow that tick to settle in for any length of time.

Most humans are infected through the bites of immature ticks called nymphs. Nymphs are tiny (less than 2 mm) and hard to see.

They feed during the spring and summer months. Adult ticks can also transmit the
Lyme disease bacterium; however, they are much larger and easier to find and remove
before they can transmit it. Adult Ixodes ticks are most active during the cooler months of
the year.

Can my pets contract Lyme Disease?

Dogs may develop Lyme disease from the bite of a black-legged tick, which may transmit bacteria known as Borrelia burgdorferi. Once ill, dogs can become feverish and lame in one or more joints. They also may exhibit sluggishness, and their lymph nodes may swell. A more serious form of the disease that affects the kidneys often is fatal.

Dogs with Lyme disease can experience an array of signs, including joint pain, swelling, and fever. Dogs may not show signs of illness for weeks or months after an infected tick bites them – and many dogs that are infected never show signs of illness. Fortunately, some tests can determine if a dog has been infected, though it can take up to nine weeks for some tests to show positive results.

Signs of Lyme disease depend on the progression of the initial infection. According to the American Veterinary Medical Association (AVMA), pet owners should watch for these signs:

Lyme disease is probably not a concern for cat owners. Although the bacteria that cause Lyme disease is capable of infecting cats, the disease has never been seen in a cat outside of a laboratory setting.

How do we compare to the rest of the United States in case numbers?

The incidence of Lyme disease in Oregon is much lower than the United States as a whole. Below is the life cycle of the Black-Legged Tick.

What does a tick bite look like when it’s on the skin of a human?

Not everyone who has Lyme exhibits a rash, much less the “bullseye” rash so often associated with Lyme disease. The picture below demonstrates the rash in all of its forms:

Is there a cure for Lyme Disease?

There are treatments for Lyme Disease if you catch it early enough. The CDC recommends antibiotics:

The CDC Writes, “The National Institutes of Health (NIH) has funded several studies on the treatment of Lyme disease that show most people recover within a few weeks of completing a course of oral antibiotics when treated soon after symptom onset.

“In a small percentage of cases, symptoms such as fatigue (being tired) and myalgia (muscle aches) can last for more than 6 months. This condition is known as chronic Lyme disease. For details on research into chronic Lyme disease please visit The International Lyme and Associated Diseases Society.”

Are there other forms of Lyme Disease?

Lyme Arthritis: Lyme arthritis occurs when Lyme disease bacteria enter joint tissue and cause inflammation. If left untreated, permanent damage to the joint can occur. Lyme arthritis accounts for approximately one out of every four Lyme disease cases reported to CDC. Because of reporting practices, this statistic may overstate the frequency of arthritis among patients seen in routine clinical practice.

The medical literature documents the protean manifestations of Lyme disease, and familiarity with its varied presentations is key to recognizing both acute and disseminated disease.

Common Symptoms and Signs of Disseminated and Late Lyme Disease

So there you have it, dear readers. This disease is often misdiagnosed so the more you know the better you are prepared to advocate for proper testing.

If you have read this blog and believe that you or someone you know may have this disease, please reach out to your primary care physician. This blog is not a replacement for sound medical advice, and many symptoms overlap other diseases, disorders, and syndromes. Only a qualified professional can diagnose you.