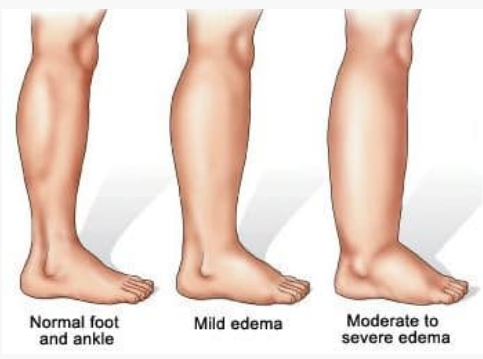 A Cup of Coffee – Are Your Feet Swollen?

Welcome back! Last week, we talked about memory loss…what’s normal and what isn’t. If you missed that blog and would like to catch up, click HERE.

Swollen feet. The pain…the inability to wear your shoes…the frustration of not being able to keep up with life. Most of us have had some type of swelling at some point in life, right? But what about those of us whose feet swell and they don’t ever go back to normal? Is there a medical reason for that? Have you been told it’s as simple as losing weight? I’m going to challenge that line of thinking today.

To Pit Or Not To Pit

First of all, let’s talk about the two types of swelling. You either “pit” or you don’t. How do you know the difference? It’s really simple. Just press into the most swollen area of your foot and if your fingerprint lingers, you are pitting. If it doesn’t, then you are not pitting.

Pitting edema and non-pitting edema are both characterized by noticeable swelling due to the accumulation of excess fluids in tissues as a result of a disturbance in interstitial fluid (fluid found in the spaces around cells). Although both pitting and non-pitting edema can affect any soft tissue, both are generally classified as peripheral edema, meaning they typically affect the arms or legs.

It’s important to know the difference between pitting and non-pitting edema, so let’s chat…

Why Does This Matter?

It matters simply because the cause and treatment may be different, depending on the underlying reason for the pit/non-pit. For much of our information, we are going to learn from a site called Osmosis.org. I found this site to be very informative and I think you will too.

As mentioned above, if you can create an indentation in your skin, then you have pitting edema. Some of the most common causes of pitting edema are congestive heart failure, venous insufficiency (improper functioning of the veins in the legs), or nephrotic syndrome (a kidney disorder).

Although non-pitting edema itself is not considered dangerous, its underlying cause may be of greater concern. Non-pitting edema will not leave an indentation, the skin will feel tight and may appear discolored. Sometimes the skin gets so tight that there’s a noticeable restriction of movement.

Non-pitting edema can be caused by a variety of medical conditions. In most cases, it serves as a sign that a given condition is affecting the thyroid or the lymphatic system, which works to protect the body against microbes, maintain adequate fluid levels, absorb nutrients, and remove certain waste products. Depending on the specific cause, non-pitting edema can result from problems that cause lymphedema, myxedema, angioedema, or lipedema.

Lymphedema occurs when lymphatic fluid builds up in tissues and causes swelling, or non-pitting edema, usually in the legs or feet. Lymphedema can be classified as either primary or secondary, depending on the origin of the condition. Primary lymphedema is the result of a rare, inherited condition that results from errors in lymphatic development and can present at different stages of life. An example of a primary lymphedema condition is Milroy disease, a genetic disease that leads to lymphatic malfunction and consequent swelling in the legs.

Secondary lymphedema is much more common as it is typically the result of injury to a fully developed lymphatic system. It can occur when the flow of lymphatic fluid is blocked by cancerous cells, compressed externally by a tumor, or damaged following radiotherapy (a treatment often used for certain cancers).

Myxedema, also called thyroid dermopathy, can occur in individuals with severe or advanced hypothyroidism, which is characterized by low levels of thyroid hormones. This can lead to an increased accumulation of fluids and other substances, often affecting the legs, feet, eyes, or mouth. Myxedema affecting the lower legs, known as pretibial edema, is the most common type. Periorbital edema, or edema around the eyes, is also often seen and results in swollen eyelids.

Angioedema refers to the localized swelling of the skin. It is usually the result of a reaction to certain allergens, such as nuts or specific medications. In some cases, however, the cause is unknown. Some allergic reactions may be characterized as anaphylactic reactions, which are severe and often life-threatening. In rare instances, the occurrence of angioedema may be inherited.

Lipedema refers to the accumulation of fat in the subcutaneous tissue or the layer just below the skin. It predominantly affects the legs and buttocks, and occurs almost exclusively after puberty in individuals who were assigned female at birth.

Despite being recognized for over 70 years, lipedema is still often confused with obesity. If left untreated, patients can suffer from a variety of health-related issues that not only affect mobility but vital bodily functions as well. Terms such as “cankles” for ankles, and “stovepipes” for legs describe the appearance of Lipedema. Early treatment is critical in preventing increasing fat accumulations from being deposited with each passing year. Treatment in later stages is aimed at treating the swelling associated with this condition, decreasing pain and discomfort in the legs, and preserving tissue health.

Is There Treatment For Pitting and Non-Pitting Edema?

Treatment for both pitting and non-pitting edema is largely determined by the underlying cause. It is highly recommended to seek out medical attention in order to diagnose and treat any dangerous underlying causes.

That’s all I have for you this week, Dear Reader…I hope to see you next time and until then, take good care of yourself and each other.