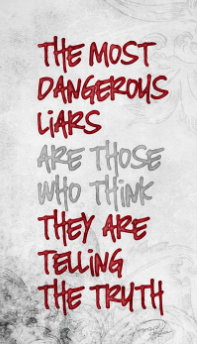 A Cup of Coffee – When You Lie To Yourself

Welcome back! Last week, we talked about Adults Who Bully Children Online. If you missed that blog and would like to catch up, click HERE.

Some would say that one doesn’t lie to themselves, but rather it is denial that keeps the boat afloat. I disagree…respectfully, of course.

Being honest with yourself means that you have to take responsibility for your own actions, and that can be a challenge for many. Admitting that you could very possibly have been in the wrong is hard. Nobody wants to have to do that. It’s embarrassing. It’s humbling. It’s necessary.

So Why Do We Do This?

“Self-deception isn’t just lying or faking, but is deeper and more complicated”, says Del Paulhus, a psychology professor at the University of British Columbia and author of a widely used scale to measure self-deceptive tendencies. “It involves strong psychological forces that keep us from acknowledging a threatening truth about ourselves”, he says.

In some people, the tendency seems to be an inborn personality trait. Others may develop a habit of self-deception as a way of coping with problems and challenges.

Is There A Technical Name For It?

MentalHealth.net tells us the term is called, “cognitive dissonance”. This is what is behind the reason why we lie to ourselves and tell ourselves untruths.

“The person who steals from his employer but tells himself that he is underpaid and deserves the extra is twisting the interpretation of his behavior in order to still feel he is okay as a human being”.

If you have to justify your behaviors, you may have a problem with Cognitive Dissonance. Truth is gold and lies are cheap.

Are There Consequences For Cognitive Dissonance?

Lying hurts your reputation, requires you to field feelings of inner guilt, and generally makes you unlikable.

Someone who does all these things isn’t anyone people want to be in a relationship with, work with, or associate with because their reputation for being a liar can rub off and suddenly people think you must be just like them or why would you associate with them in the first place?

Above all, you shouldn’t lie to yourself because you are all you have: you should aim to be your own bastion of truth as much as you can manage. This will give you greater control over yourself. If you don’t have your word, you really have nothing.

I Might Be Doing This…Are There Ways To Know For Sure?

The Understanding Project says there is, “People lie to themselves hoping to avoid disruption and to maintain functioning. But in a paradoxical twist, internal lying actually wears on your ability to function. And the evidence is often visible.

“Maybe anxiety keeps you up at night, prompts you to leap out of bed, haggard and yet restless, hopelessly fixated on the idea that something is wrong. Maybe you’re lying to yourself about who you are and what you want. And here you are punishing yourself by not having the guts to stop with the lies and to listen to the truth.

“A habit of lying is also a massive culprit of people wandering around life in a muddied state of confusion. Perhaps this is you. You feel disconnected, on-edge, or irritable and you can’t seem to figure out why. Cognitive dissonance is feverishly at work. What you are telling yourself contradicts some inner reality tucked away inside you that you cannot, for the life of you, shake.

“This ‘inner reality’ may currently be the source of your frustration and unease if you forsake it in favor of easy, self-affirming lies, but it could also be your freedom if you choose to take the brave step and heed it.

“As another example, sudden outbursts of emotional volatility that seem to spring from some irrational part of yourself usually point to an inner tug-of-war between truth and lies. Suddenly, you’re doing some run-of-the-mill task and, before you know it, tears are streaming down your face and it’s all a giant mystery to you. But is it??

“Sometimes it is our bodies that alert us to our cycle of endangerment — that plead with us that we must stop feeding ourselves the same tired lies over and over again. It’s fake and toxic and not helping me, seems to be the refrain.

“Or say you suffer from fatigue and insomnia. You suppose that these physical circumstances constitute the problem itself. Really, however, they are but symptoms of something broader being enacted on the psychological stage. Sometimes, when you refuse to be brutally truthful about your feelings, thoughts, desires, and shortcomings, your body literally revolts in a dizzying display of attention-getting designed to alert you to what’s happening psychologically.

“After all, your mind and your body are designed to be in sync. If you are an anxious, angry bundle of nerves, you will manifest this reality in both directions — internal and external“.

I’m Tired Of Lying To Myself…What Can I Do? How Do I Stop?

1) We can change our attitude

2) We can acquire new information

3) We can reduce the importance of our beliefs

4) We can be honest with a professional counselor and move in the direction of healing the underlying trauma that started this to begin with.

So there you have it, Dear Reader. Being aware of this can help us to be more aware of, and hopefully avoid, the many negative consequences of the self-deception we all engage in – believing our own lies.