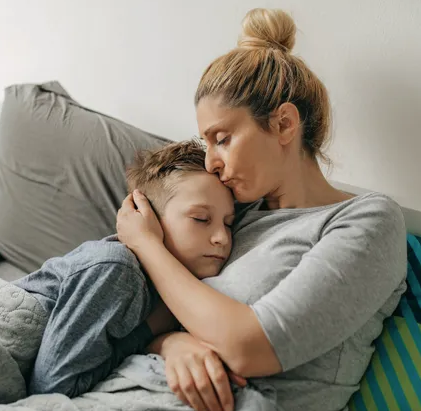 A Cup of Coffee – Is co-sleeping with your child hurting them in the long run?

Welcome back! Last week, we talked about protecting our children by using the word “secret” less and adding some better words to use in its place. If you missed that blog and would like to catch up, click HERE.

For the purposes of this blog, we aren’t talking about the child who crawls in bed with us for one night because they had a nightmare or the sick child who sleeps with us for a week because they have the flu. We are going to discuss the decision to sleep with our children from infancy until they are in their pre-teens or older. Some of you will agree and some will disagree, but this is at least worth a discussion, given the many different outcomes possible for the child.

Let’s start by defining cosleeping. What is it?

Co-sleeping is to sleep in the same bed. “We’re currently co-sleeping with our three-month-old son in our family bed”. This can mean mom and dad, or just one single parent, but the idea is to share the bed.

Why would a parent do this?

Parent states that “some parents praise co-sleeping because it promotes bonding, helps children feel safe, and makes nursing easier”.  While many parents would agree with these statements, some would say that the child doesn’t need to actually be in the bed, but could be next to the bed in a crib for the same effects.

The number one worry parents have with cosleeping is accidental suffocation, especially from the partner who isn’t breastfeeding. They don’t have that internal alarm clock that says, “don’t fall into a deep sleep, the baby is near” that mothers do. It turns out that this concern is a very valid one.

WebMD reports that “the number of babies dying from accidental suffocation and strangulation in bed skyrocketed 184% from 1999 to 2015, according to new statistics released Monday by the American Academy of Pediatrics”.

It’s understandable that an infant would sleep next to their mother, but at what age does this end?

For some parents, it doesn’t. They sleep with the child until the child becomes disinterested or uncomfortable with the arrangement. Then the child naturally gravitates back into their own bed in their own room.

Is there ever a time that this doesn’t happen?

Yes, of course. Some children cosleep until they are 8 years old. While many professionals advise against this, there are some who say, “let it go”. The child gets to decide.

Do many children cosleep after the age of 8?

Recent studies indicate that a near epidemic proportion of children are co-sleeping with parents today. According to Parenting’s MomConnection, a surprising 45% of moms let their 8- to 12-year-olds sleep with them from time to time, and 13% permit it every night.

So that means that 13 out of every 100 mothers still sleep with their children past the age of 8. Is that harmful?

According to the Canadian Pediatric Society “behavioral insomnia” is a medical diagnosis used to describe 20-30 percent of kids who have trouble falling or staying asleep, and who end up in their parents’ bed at one point during the night. The impact of chronic co-sleeping on a person’s functioning–younger and older–can run the gamut from increased dependency and anxiety to memory loss, fatigue, low energy, depression, and obesity.

When parents band-aid nighttime anxiety symptoms by allowing co-sleeping, they often assume that kids will naturally grow out of it and many do not.

What happens when they don’t grow out of it and continue to want to cosleep?

The Cut reported on a study in 2016 that pointed out some issues with cosleeping past the age of 6. A published study in the Journal of Affective Disorders examined years of data of nearly 4,000 Brazilian children from the age of 3 months to about 6 years, found that bed-sharing was a “common practice” — and that it was “associated with impaired child mental health at the age of 6 years.”

The study found that bed-sharing correlated with a higher prevalence of mental health issues overall, and it was especially linked to internalized disorders like anxiety and depression.

Today’s Parent interviewed Janet Morrison, a psychological associate from Toronto who assesses children, adolescents, and families. “There is nothing wrong with cuddling your eight-year-old in bed and, on occasion, sleeping with them for comfort when they’re stressed or ill. I don’t think there’s any harm in sleeping with them at this stage, although you want them to begin developing some independence.”

Psychology Today reports that children today have higher levels of anxiety than previous generations. The reasons for this include higher divorce rates, frequent transitions, more over-scheduling, greater academic pressures, and the influence of being plugged in 24/7. Parents cosleep with the children, hoping to help them feel less anxious, and as a result, children today are less self-reliant. Many preteen children don’t yet know how to be alone at bedtime and they haven’t been forced to learn.

Participating in normal activities that children experience, such as attending sleepovers with friends, overnight class trips, and other independent activities becomes so anxiety-producing, that the child refuses to participate in favor of sleeping with their parent(s), where they feel completely safe and secure.

The child may also fear leaving their parent out of concern for the parents’ safety.

Is the parent getting a benefit out of cosleeping with their child?

Morrison points out that it is not a child’s responsibility to console their parents. “This is not to say that the cuddling isn’t mutually enjoyable for parents and kids. Cuddling is important, comforting and a lovely time out from the hassles of the day.”

Manhattan Psychology Group, PC believes that “Anxious parents may find it difficult to set limits with their child and thus allow the child to continue sleeping in their bed, even once they have recognized that the pattern is problematic. It is important for parents to know that responding to a child’s anxiety to sleep in their own bed by allowing them to sleep with a parent only exacerbates a child’s fear of sleeping alone. Thus, rather than having to learn how to self-soothe and manage his or her own fears, the child has only learned how to escape from the fear of sleeping in their own bed”.

Do parents that cosleep with older children engage in a higher incidence of sexual abuse?

Medical News Today says no…at least not sexual abuse. They may, however, be engaging in “Covert Incest”. Covert incest occurs when a parent or caregiver relies on a child for support that a romantic partner would typically give. Another name for it is “emotional incest.” It does not involve sexual abuse. What makes covert incest distinct from other types is that no sexual contact is involved.

The word “covert” refers to the fact that this type of incest is often less noticeable and more difficult to identify than incest that involves sexual abuse. Therapists sometimes call this “enmeshment.”

The parent may rely on the child for emotional support. This may include confiding in them about their relationship problems, looking to them for comfort or reassurance, or asking the child for advice that is inappropriate for their age. Caregivers who engage in this behavior may not realize that it is harmful. The child involved may feel that the relationship is simply special. They may offer up suggestions to the adult or engage in adult conversations that are above their age level.

Covert incest often occurs when a parent’s or caregiver’s emotional needs are not being met by a partner or spouse.

The parent will overshare personal experiences and feelings in a way that creates unrealistic expectations, unhealthy dependence, and confusing roles. Often, enmeshed parents treat their children as friends or siblings, rely on them for emotional support, and share inappropriate personal information.

But I don’t want my child to leave me

Sharon Martin shares with us that, “In order to become a mature and emotionally healthy adult, you have to individuate and become independent from your parents. Individuation is the process of separating yourself both physically, emotionally, intellectually, spiritually, and so forth. Individuation is the process of becoming an individual, not just an extension of your parents”.

The parent needs help in order to help their child

If the parent(s) live with their own mental health issues, such as anxiety, depression, loneliness, or emotional dependence on their children, they of course need to seek help. It is more difficult to help their child if they don’t help themselves first.

When it’s time to cut the apron strings, The Manhattan Psychology Group, PC gives us a roadmap;

Show me the way!

There you have it, Dear Reader. While cosleeping may be tempting when you are exhausted and need to breastfeed every two hours, it may make sense to put the crib next to the bed. This alleviates the fear of accidental suffocation and removes any chance that you will still be sleeping next to your child when they are 13.

Let’s meet here again next week and share another Cup of Coffee. Until then, be good to yourselves and each other.