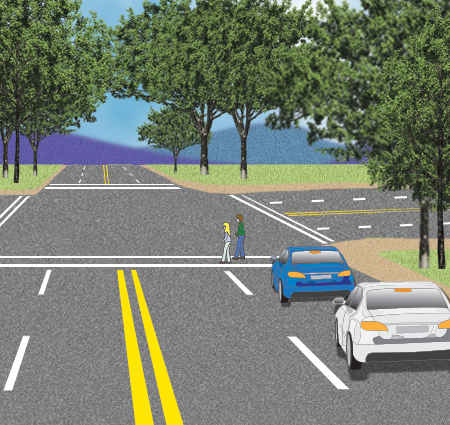 A Cup of Coffee – When is it beneficial to pass someone on the road?

Welcome back! Last week, we talked about the Other Side of the Coin to cosleeping. What are the benefits of cosleeping? If you missed that blog and would like to catch up, click HERE.

This week, we are going to talk about passing cars and trucks on the road. In the little town of Canby, Oregon, we recently lost a young man to an accident that involved passing. Most of us have passed a car or truck at some point in our driving experiences, right? In my opinion, this blog needs to be shared with not only other adults but the new drivers in your/our lives. Even if they got a great passing score when they got their license, please, please go over these points again with them in DETAIL. Talk about the hard stuff. Don’t know any new drivers? Then just share the blog. It will get to one, I promise you.

We are going to dissect the act of passing. Why do we do it, does it achieve a goal, and is there ever a time when we should just stay put and ride it out? Grab A Cup of Coffee and let’s chat.

So, to start off with, passing almost always (NOT always, but almost always) involves speeding. We have to speed to get past the person we are passing. Then, after we pass that person, we go faster than they were driving, because well, that was the entire reason for passing in the first place, right? They were going too slow for our liking. They were in our way, holding us up, and causing us to become so anxious that we finally did the deed and passed them.

For purposes of our blog today, we are going to use the Oregon Drivers Manual for “rules of the road“. If you live in another state, please consult your DMV for the rules of driving for that state.

The first thing to address is speeding. The DMV states, “Do not exceed the speed limit when passing; it is against the law to exceed speed limits at any time“. So if the person in front of you is driving the speed limit, passing is illegal.

What does the road tell us about passing?

The State you live in gives you a literal road map to follow in the way of markings on the road itself. These markings were not just put there haphazardly. They take many things into consideration, like the curves ahead of you, the amount of traffic on that road, visibility, and more. Paying attention to the markings on the road is critical to a safe pass.

The following pictures were taken directly out of the Oregon DMV Drivers Manual and indicate that there is NO passing allowed when you are seeing these markings on the road:

If the line is a broken yellow line, can I pass?

Can I pass on the right?

You may pass on the right only under one of the following conditions:

Use extra care when you pass on the right. Other drivers do not expect to be passed on the right. Do not exceed the speed limit to pass.

Does the driver being passed have any responsibility?

The DMV states: “When another driver starts to pass, stay to the right. You can help the other driver pass you safely by checking oncoming traffic and adjusting your speed to let the vehicle move back into the right lane as soon as possible“.

A slow-moving vehicle rolled its window down and motioned for me to pass…can I pass?

DMV: “Do not use your hands or lights to signal other drivers when to pass. The law prohibits flashing any of your signals at drivers to let them know when to pass“.

I’m LATE…is speeding going to get me there sooner?

While it may seem like it will, in all actuality…it doesn’t. At least not much sooner. We’ve all seen the person who passes us on a curve, going way over the speed limit, only to pull up behind them at the next stoplight, right? It doesn’t work.

For all of you math nerds out there, here’s the actual equation, and no, I’m not kidding.

How Much Time does Speeding Save?

According to the Mathematics of Speeding: “Short answer? Not as much as you might think. The longer answer is that the relationship between travel time and speed is an inverse one: time=distancespeedtime=distancespeed. You may remember a similar inverse equation from math class: y=1xy=1x. This is a curve that never quite touches either axis going from x=0x=0 out to x⇒∞x⇒∞. So we can plot time on the y-axis as a function of speed for a variety of different distances to get a graphic for how long a trip will take at different average speeds“.

For the rest of us: “We can pretty quickly see that at low speeds, going one mile per hour faster will have a pretty sizable impact on total time. However, by the time we reach the highway speed limit (65, 70, or 75, depending on the state), A one mph increase is going to make a pretty small change in total change: not zero, but not necessarily substantial. So speeding, even speeding a lot, doesn’t change the total travel time by a whole lot. Obviously, speeding bears the risk of getting pulled over and getting a ticket, as well as increased risk of accident, and burning more gas“.

They left one very important consequence out of their equation:

Death. You can kill someone. You can kill yourself. That one impulsive act can literally devastate hundreds of people. The families of the deceased, their friends, the groups they belong to such as a church, clubs, and social media groups. If they attend school, then hundreds of teachers and students. If they work, then their colleagues and supervisors.

And the consequences beyond grief? Jail. Again, this pertains only to Oregon driving laws, so please research your own state for their laws.

Oregon Driving Laws says this about that:

Second-degree manslaughter. A motorist can be convicted of second-degree manslaughter for killing another person while driving in a reckless manner. Basically, a person acts recklessly by knowingly doing or failing to do something that creates a substantial risk to others. In other words, the person is aware of but disregards the dangerousness of the conduct. The person’s action or inaction must amount to a gross deviation from what a reasonable person would do under like circumstances.

A person is considered “under the influence” if the person’s “physical or mental facilities are adversely affected to a noticeable or perceptible degree.”

That sounds serious. What are the penalties?

The consequences of a driving-related killing depend on the circumstances. But generally, the possible penalties include:

The risks outweigh the benefits. You won’t get there any faster, and you’ve now risked putting yourself or someone else in harm’s way and if the bad thing happens, you either die, kill someone else, and/or end up in a lot of legal trouble. Not. Worth. It. At. All.

That’s all I have for you this week, Dear Reader. Again, please share this blog. You can do so by sharing directly from the blog itself. Find the appropriate icon, and share, share, share. You may just save a life, and that life might even be your own.

See you next week, until then, be good to yourself and each other…