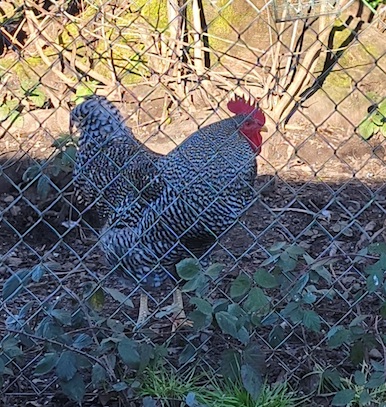 A Cup of Coffee – When The Rooster Sings

Welcome back! Last week, we talked about how painful social media can be, and how to overcome that pain. If you missed this blog and would like to catch up, click HERE.

What I’m about to share with you involves a rooster. For those of you who have never owned chickens, you have no idea what you are missing out on, but I’m about to tell you so that you can reconsider your life choices.

I first learned of the will of a rooster when I was 18. My friends had a rooster named Hobart, and he was very protective of his territory (their home). When you pulled up to the house, you were wise to arm yourself with an umbrella, a bat, or anything that had a wide swing to it. Mind you, you didn’t use it to HIT the rooster, only to claim your space as you would run for your life.

I would get out of my car and stick the bat out, yelling, “I MEAN IT! GET BACK!!!“. He would throw his head back and laugh/crow at my assertiveness, and I swear I heard him sing, “silly girl, I shall eat you for lunch”.

I would then start turning in circles, my bat swinging clockwise, giving me the length of its wood for protection. As I turned circles, like a ballerina pirouetting across the stage, I would slowly move closer to the front door, getting dizzier and dizzier. One day, my friend’s dad stood at the doorway yelling, “JUST RUN!“.

Clearly, he had never seen me run. That was a bad idea. One that proved disastrous and resulted in my new jeans ripping at the knees, bloodied palms, and mud on my belly. Thankfully I could still kick and the rooster, not knowing what to make of me, stayed clear but continued crowing in victory over his fallen adversary.

Now, one would think that after this experience, I would never, ever, ever, (did I say EVER) personally own a rooster, right? Apparently, common sense isn’t so common, and a rooster we do own.

This rooster is huge. We’re talking turkey-sized huge. We’re talking Jurassic Park scares me senseless when he runs at me, huge. I’ve watched his claws, which mimic raptor claws, tear flesh right off of a human shin. He knows how to use them and he’s far from afraid to inflict as much pain as possible.

He has a large red bit that sticks out from the top of his head—the comb—and another that dangles beneath his chin—the wattle, only he doesn’t waddle…with his wattle…no. He puffs out his chest, flaps his wings several times, then does this walk that tells you he is quite sure he’s the cock of the walk.

Now I know why the man about town is called that. However, I’m here to burst bubbles today when I tell you that men that think they are all that and a slice of bread have NOTHING on our rooster. Save your money on the gym memberships, fellas, this rooster has you beat.

I won’t even describe what he looks like when he’s running at you full speed. It’s the things nightmares are made of and I’d never do that to you, dear reader…

He strikes terror into the heart of all

My husband and I have had numerous people visit us, some stay a day, some a couple of years. The one thing they all have in common is a fear of our rooster. He was raised with his hens from chickhood. They are all very bonded, and he’s a very good protector of his flock. Unfortunately, he doesn’t understand the assignment. He bites the hand that feeds him. Literally.

Collecting eggs is a nightmare. So much so, that I went out and bought a plastic pitchfork (in pink, of course) so that it was light enough to wield as a weapon. My husband was the first to try it out.

We woke up at 6 am amid the rooster’s battle song of “we ride at dawn!“. A chill went down my spine and I had a bad feeling about our plan.

He stood at one gate, and I at the other, in case the bad thing happened and he needed a distraction. As he slowly moved into rooster territory, I heard the pitch of his voice rise. I watched the rooster puff up and I started yelling, “ABORT!! ABORT!!“. Unfortunately, my husband had removed his hearing aides so he wouldn’t lose them in the field.

As testosterone filled the air, they rushed each other, and let me tell you, I’ve never seen my husband so focused. He eventually made it to the hen house and locked himself in, as the rooster paced back and forth in front of the door, menacingly. If only my husband hadn’t dropped the egg basket in his run for the coop.

I was laughing so hard that tears were running down my legs, but alas, I was of little help. He made it back to our home and only managed to break one tong out of the pitchfork. His scratches have healed nicely but he’s still limping a tad bit.

Then there was a young man who came to visit for a few weeks. He was determined to show me how it was done. Halfway into the field, he grabbed a length of extra chicken wire and tightly wrapped it around his body. This didn’t give him much room to walk and reminded me of my brilliant idea when I was 16 to make a leather floor-length skirt and wear it to a dance. My feet could only move a few inches at a time, and full steps were out of the question. Thus was this man’s dilemma.

When the rooster started chasing him and pecking him through the wire, he panicked and started screaming. His high-pitched yelps of “Get him off me” still ring in my memory. I tried to help him as he fell to the ground like a strong oak tree being felled by a talented lumberjack. I yelled a helpful suggestion to “just roll to the gate!” since he was on the ground anyway, right? Poor fella. That had to hurt.

Is the pain actually worth the gain?

Now, one wonders what makes this all worth it because after all, it’s costly to keep chickens. The cost of the coop, the land available for them to free-range, the feed, the water, the health checks, getting the wings clipped, the spurs cut, and more vs. the cost of a dozen eggs at the store? Are we out of our ever-loving minds?

Apparently, yes we are. Cause here we sit with a rooster that won’t let us near his hens, and a fridge void of free-range eggs that, I hear, are OH so delicious. If only we could taste one…