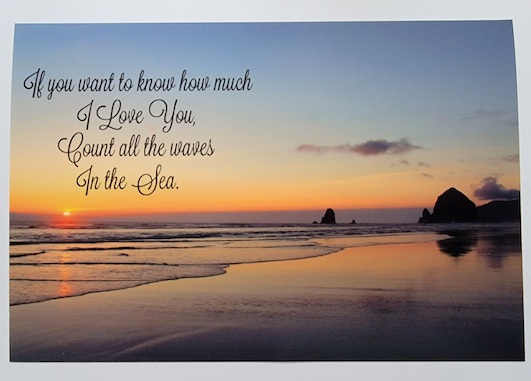 A Cup of Coffee – When Cupid Doesn’t Deliver

Welcome back! Last week, we talked about roosters! If you missed this blog and would like to catch up, click HERE.

This week, we are going to talk about Valentine’s Day. I also offer you a treat! The photo credit to the picture above goes to Charity Payne. You can order this on a greeting card (it’s an actual photo she took), or you can buy them if you live locally in Canby, Oregon. They are available at Gwynns CoffeeHouse, or you can contact her at HeartSpeakStudio20@gmail.com. She has many different cards to choose from and Valentine’s Day is coming!

Okay, back to business.

History tells us that Valentine’s Day is actually St. Valentine’s Day. The Catholic Church recognizes several stories regarding this Saint, with all of the endings leading to him being declared a martyr. While the history of this saint is uncertain, all three versions of his story depict him as being sympathetic, heroic, and best of all, romantic. Ahhhh, don’t you just love a romantic ending to a story?

Some believe the placement of this holiday is to commemorate his death or burial date. Others believe his birthday was strategically placed in mid-February to overshadow a pagan holiday, Lupercalia, which was a fertility festival dedicated to Faunus, the Roman god of agriculture, as well as to the Roman founders Romulus and Remus.

This festival had some interesting moments. Members of the Luperci, an order of Roman priests, would gather at a sacred cave where the infants Romulus and Remus, the founders of Rome, were believed to have been cared for by a she-wolf or Lupa. A goat would be sacrificed, for fertility, and a dog, for purification.

The goat’s hide would then be cut into strips, dipped into the sacrificial blood, and taken to the streets. Women would gather to be gently slapped with this bloody hide because they believed it would make them more fertile in the coming year. The young women would then place their names in a big urn. Here’s the fun part: bachelors would each choose a name and become paired for the year with the name chosen from the urn. These matches often ended in marriage. WOW!

The end of it for a while

The Pope eventually outlawed this practice, deeming it “unChristian”. It would be a very long time until this day was associated with love.

In the Middle Ages, the people realized that the birds would mate during this time frame, and this added to the idea that Valentine’s Day was for romance. Geoffrey Chaucer, an English poet, was the first person to put pen to paper and speak of Valentine’s Day. He wrote, “For this was sent on Seynt Valentyne’s day/Whan every foul cometh ther to choose his mate.”. He was speaking of birds, of course, but hey, whatever works!

There is no record of written Valentines until after the year 1400. The oldest known Valentine appears in the British Library in London, England. It was written by Charles, Duke of Orleans, to his wife while he was in prison.

So who is this Cupid dude?

Cupid has his roots in Greek mythology as the Eros, the Greek God of Love. The Greek Archaic poets believed Eros was a handsome immortal who toyed with the emotions of Gods and men. He used golden arrows to sow love and leaden ones to create aversion. It wouldn’t be until the Hellenistic period that he would be portrayed as the chubby cherub we now see in Valentine’s Day cards.

The beginning of commercialism – Write it, don’t say it

By the middle of the 18th century, it was common practice for both friends and lovers to exchange small gifts or handwritten notes, and in 1900, commercial cards were finally made available for those wishing to partake.

The greeting cards were a relief, as during this time direct expression of love was discouraged. The expression of emotions was not something folks engaged in but it was socially acceptable to send a premade card.

So what happens when Cupid doesn’t deliver?

By now, we all know that Valentine’s Day doesn’t necessarily end in a love note from a secret admirer. I know that’s the hope of many a young heart, but realistically, Cupid is a loser. He doesn’t deliver. So why is it that we can’t find love, even when we are open to it and want it more than anything?

Such a complicated question

I would like to say I have the scientific answer to this question, but alas, I do not. Nobody does. Love is one of those things that escape us. How and why it happens is a mystery. What I do know is this: Love isn’t something that you can “find”.

It’s not in a bar, or in the pew behind you in church. It’s not at the book club or the high school dance that you didn’t get invited to. No, love isn’t going to be found in these places.

Love is patient, love is kind. Love is created.

While the seeds of love may very well begin in the places listed above, love itself isn’t. Love is something that takes time, patience, kindness, understanding, flexibility, selflessness, consideration, and sacrifice.

Love isn’t something that just happens, it’s created. If you can’t open your heart to someone other than yourself…if you can’t give more than you get…if it’s always about you, and never about the other person, then Love will escape you again and again.

You must first fill your own tank with love, in order to be able to give of that love to another human being. When you are both full of love, with your cups overflowing, then giving to each other only increases the amount available for both of you.

If you come into a relationship with a needy, empty tank, only looking to be filled, then your partner will soon run out of their own love, and the relationship will have to end. There is no other choice. Empty tanks create conflict, resentment, and breakups.

Don’t expect your partner to keep your tank filled

Once coupled, it’s vital to give your partner space to fill their tanks when they request it. Time alone to read or create, time with the friends, solo drives to the beach or the mountains…all can refill that tank so that your partner can then give you the overflow. If these requests are met with suspicion, accusations of affairs that don’t exist, or control, then your partner will soon run out of love to give you.

Love is a choice

Love is a choice. Make good choices. Preserve your own tank of love, and don’t enter into anything that provides you with less than you have to offer. You matter. The right person will come along, gently, quietly, when you least expect them, and you will be thankful you waited for the right Silly Valentine.