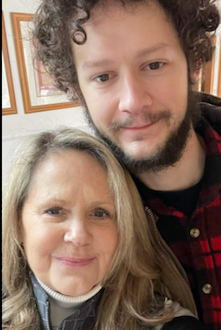 A Cup of Coffee – It Happened Again

Welcome back! Last week, we talked about Men that are Abused. If you missed that blog and would like to catch up, click HERE.

That’s a myth, but it has always held true in my life. This past week it continued to hold true. We made the painful decision to honor my mother-in-law’s wishes to be put on hospice. While we completely understand her feelings around this subject matter, it doesn’t make it any easier.

Then, I noticed a black spot on my elderly cat’s lip, which has since been confirmed by two veterinarians to most likely be cancer. He’s such a sweet cat and this one hurts. They all hurt, right…but this one especially hurts. Lucky’s luck is running out…

A week ago, the third event took place. David and I had been on our way to the “Canby house” to work. This is the home David grew up in, that his parents left, to live in assisted living, and while we don’t reside there yet, we will soon. We drove separately, but both noticed that the Amtrak train was going fast. Really fast. Fast enough that David mentioned to me when he arrived, “Did you see how FAST that train was going? It was hauling…”. Yes, yes I had noticed that as well.

I had also noticed that there had been another train stopped, which they often do to load/unload/switch tracks. Lately, they have stayed stopped, blocking intersections for long periods of time, and it could become infuriating if you were stuck and unable to move. On this day, David and I drove all the way through town to make it through an open intersection.

A text confirmed it

As the fire engine’s sirens began to wail, I suddenly realized that there was a possibility we’d had another train fatality. Then came the text from my friend, Julie, that simply said, “Linda, that was my grandson that was hit by the train. I’m a mess”. My heart dropped.

Her grandson had been waiting at one of the blocked intersections, and having waited, he suddenly decided to jump through the boxcars, only he didn’t realize there was a moving train coming down the other track. He was wearing earbuds and listening to the music that he loved so much, and it is speculated this is why he didn’t hear the train. He was simply going to our local store, Cutsforth’s, for sushi. It was devastating, even to those who didn’t personally know him.

One for all and all for one

You see, when you live in a small town, nothing happens in a vacuum. If something horrible happens, we all experience vicarious trauma. Your trauma is mine, and mine is yours. My heart hurt for her heart which was now shattered into a million pieces by a knock on the door and the news that was delivered by our local first responders. Their hearts broke as well.

Social media can be brutal

My friend asked me to manage the public response, as she knew there may be speculation as to why this happened. As I posted to local social media, I put my trust in fellow social media administrators to handle this with delicate gloves. The people of Canby did not disappoint. Soon the young man’s cremation and urn were paid for in order to allow this grandmother an opportunity to grieve without worry. My heart swelled with pride and gratitude.

This wasn’t the first time

She and I continued to talk as she processed this horrible day, and my brain couldn’t help but wander back to prior train fatalities.

There was the boy, Alan, that was good friends with my sister, who got stuck on the train trestle, riding his motorbike. The train couldn’t stop.

There was my friend’s sister who was in a car full of people who got stuck on the tracks and couldn’t get out of the car in time.

There was my own experience with the power of a train, back in 1976, when all the school children were gathered at the tracks to watch a steam engine roar through town. As the train raced through Canby, all the kids in the front went down like dominos, the wind force throwing them back into those of us in the rear. The only lesson I remember learning that day was that trains were very dangerous.

Exactly one week later, I was sitting on the front porch of the Canby house, taking a break from weeding, when I noted that Julie had posted on social media that it had now been exactly one week to the minute since she lost her boy. Then my phone vibrated and her text came through, “The train went by too”. I knew. I had heard it as well, sitting on the very porch where I had first learned of this tragic event one week ago. She continued, “I’m never gonna be able to hear the train again without having a panic attack”.

I went back to the weeding because I didn’t know what else to do. As I sat there, digging in the dirt, my mind cleared. I watched the worms swimming through the freshly turned earth, and I heard my dad’s words in my head, “you’ll know it’s good working dirt if there are worms”…” that train”, I thought, I always loved the sound of that train growing up. Now it had become a menacing sound.

It lulled me to sleep at night…it told me the world was still there, and still safe. I was safe. The train made it so. Now the train didn’t feel safe like it used to. Now the train just wanted to eat people I cared about.

This child…this young man…what a loss to the world

As I pulled the most stubborn of weeds, I heard my mama’s voice, “get the root…if you don’t get the root it will just grow back” followed by, “if you don’t get all the little ones you’ll just be back out here again in a couple of days doing this all over again”…

“What was I doing at 23″ I mused as I pulled the most stubborn of weeds…” oh…giving birth to my firstborn”. My friend, Julie, was not just a grandmother to this boy, but a surrogate mother as well. His biological mama struggled, and he lived with Julie more than not. “This was her grandson and her son”, I thought as I raked the leaves into a pile. Leaves that were no longer green and had left this earth last winter, only now to be buried.

A tear dripped down my dirty face, leaving in its wake a path of helplessness. What can I do? What should I do? How can I help…a meal train had already been set up and food was being delivered…oh Canby, I love you so.

Oacean was bonded to his girlfriend and only had one class to go to finish up college. Due to an Asperger’s diagnosis, life wasn’t always easy for Oacean. He struggled in school and was eventually homeschooled. He went to job corps and got his GED there. He was a writer, a poet.

I pulled out a large rock and with it several worms. I wiped my nose on my sleeve and gently put them back into some fresh dirt. I noted that one was the longest worm I’d ever seen before as it doubled back and crawled over my shoe. I just sat and watched it crawl, wondering why a 23-year-old poet, something this world needs more of, had to be the one to go.

There are men out in the world creating war and killing innocent children, yet, they stay.

Oacean enjoyed blowing glass and reading. His Nana (what he called Julie) said he would read every opportunity he got. He loved his hometown of Canby, Oregon. He loved the outdoors and being in the woods or around water, hunting edible mushrooms as a hobby.

The worm finished its trek across my shoe and a child stopped by to say hello on their scooter. “Hello, lady”, he said. I stopped what I was doing and managed a smile, “well hello there, how are you?” “Fine thank you” he answered, as I’m sure he was taught to respond. “My mom says you are bringing this house back to life. Why did it die?”.

I stumbled and stammered, trying to come up with a response that would make sense to a small child. “well you see, it hasn’t been lived in for a very long time, and it became sad and lonely. It gave up hope. So now, we are giving it love and attention, and it is coming back to life. Isn’t that wonderful?” “YES”, he beamed as he rode off, happy with my explanation.

I went back to digging…”Did Oacean’s Nana ever have to answer those hard-to-answer questions? I imagine she did. She didn’t know she only had a set number of years left to be with him. How painful”…

Julie shared with me that Oacean and she had the same taste in music; John Prine, Glen Campbell, Tom Jones, The Daddys Journey, you name it, he loved it.

This family will be loved

This tragedy wasn’t just someone out in the community who passed away. This passing encompassed all the passings before him, all the loved ones lost to so many over the years…so many lost to the train.

It was felt hardcore by many, many citizens in Canby, and we are all here for this family until they say they no longer need us. If that time never comes, then that’s ok too.

The healing properties of dirt

As I was finishing up this blog, I received a new text from Julie. It read, “I’ve been in the yard all day. It’s been good for me.” Amen, my friend. Amen.

Time to take a break and regroup

There are times in life when it gets to be just a little bit too much. I think that I’ve reached that point. David and I will be taking a two-week hiatus from our work, starting next Wednesday. Hopefully during that two weeks, life will start to make sense again.

Take care of yourselves and each other. Hold your loved ones tight. We are all, all of us, just one spontaneous decision away from death. You just never know.