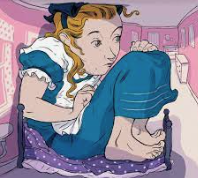 A Cup of Coffee – Alice In Wonderland Syndrome

We’re back from vacation! Did you miss us? We sure missed you...

This week, I’m excited to bring to light a syndrome that doesn’t get much attention. It’s called the Alice in Wonderland Syndrome, and it’s really a thing! Read on to see if you, or someone you love, might be experiencing this, rarely talked about, medical diagnosis.

Who first discovered this syndrome?

Alice in Wonderland syndrome was first described in 1952 and was given its name in 1955 by John Todd, an English psychiatrist.

How rare is it?

Anjan K. Chatterjee, MD, a neurologist at Penn Medicine in Philadelphia, states this is so rare that many experts may never encounter it in their careers. To date, no epidemiological studies have been done that would show how common AIWS is in the population, so it may be underreported, especially by adults who don’t want to be considered mentally ill. This syndrome is seen mostly in children who at such a young age, are more willing to disclose what they are experiencing.

According to a review published in June 2016 in Neurology Clinical Practice, there is currently no universally known way to actually diagnose this syndrome.

Did the man who wrote Alice in Wonderland have this?

This syndrome is thought to be connected to migraines, which the author suffered from. “It actually turns out that the author Lewis Carroll probably had migraines, based on some of his diary entries,” says Chatterjee. It’s been speculated that he may have experienced Alice in Wonderland syndrome himself, and that may have been part of the origin of some of those unusual parts in those stories”.

As Alice herself famously said in the book Alice’s Adventures in Wonderland, published in 1865, “This is getting curiouser and curiouser!”

What are some symptoms?

People with AWIS report perceiving changes in their surroundings. “Usually, a bout includes either micropsia, where objects appear small, or macropsia, where things look bigger than they actually are,” says Dr. Chatterjee. “People experiencing Alice in Wonderland syndrome may perceive their own body parts in a distorted way, either much bigger or much smaller”.

“These episodes can last for minutes and sometimes longer — it’s not quick — or it’s a two-second thing where you rub your eyes and everything is better,” says Chatterjee.

A pediatric neurologist weighs in

We don’t know exactly what is going on to cause people to see objects as larger or smaller than they really are, says Grefe. “There are some theories that make sense from an anatomical basis,” she says.

When AIWS is related to epilepsy, it seems to originate in the frontal lobe, but there’s still a lot to be learned about that, she adds.

There are other conditions besides migraine associated with Alice in Wonderland syndrome, says Grefe.

“This would include temporal epilepsy, as well as certain kinds of infections — viral infections, such as mono or the flu,” she says.

I always thought Alice in Wonderland was influenced by LSD

This syndrome may also be caused by certain drugs, such as LSD or other hallucinogens. And “there are definitely psychiatric disorders where those kinds of misperceptions are part of the symptoms,” says Chatterjee.

There are other conditions besides migraine associated with Alice in Wonderland syndrome, says Grefe.

“This would include temporal epilepsy, as well as certain kinds of infections — viral infections, such as mono or the flu,” she says.

Mono, or infectious mononucleosis, is most often caused by the Epstein-Barr virus (EBV), a kind of herpes virus and one of the most common human viruses, according to the Centers for Disease Control and Prevention (CDC). Most people get it at some point in their lives. In rare cases, EBV can lead to complications such as encephalitis (swelling of the brain), which is often the cause of AIWS in children.

Is there a treatment?

There’s no specific treatment for Alice in Wonderland syndrome, says Chatterjee. “The treatment depends on what’s causing the visual disturbance — if it’s migraine, we would use migraine medication. That would mean preventive medication if you have migraine frequently, and as-needed acute migraine treatment for the attack,” he says.

If the Alice in Wonderland syndrome is related to seizure, then seizure medication would be appropriate, adds Chatterjee.

“There’s something happening in the physiology of migraine or another underlying condition that’s kicking off these perceptual phenomena,” says Chatterjee. For that reason, you wouldn’t give medication specifically for the AIWS visual disturbance, he says.

“That’s one thing that makes this different from hallucinations or delusions, where you might want to give people medications to try to suppress whatever is generating those visual images from the interior of our brains,” he says.

Since Alice in Wonderland syndrome is not like that, you would treat people for their migraine or epilepsy or any other underlying cause, thereby treating the disorder itself, not the expression of the disorder, says Chatterjee.

If you would like to see some more data on this topic, click on the following link: https://www.ncbi.nlm.nih.gov/pmc/articles/PMC4909520/

If you would like to view a video of a person who has this syndrome (and she’s very well versed in it) click this video link: