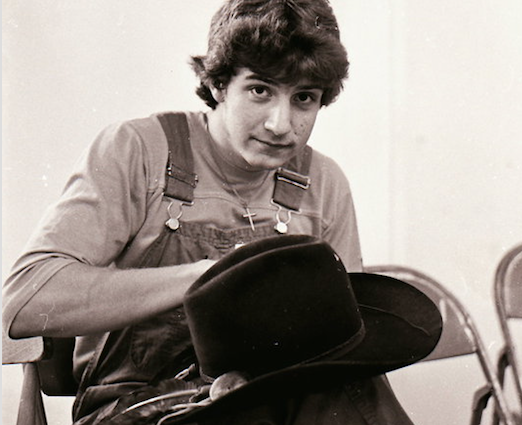 A Cup of Coffee – It’s Time for Reunions!

Welcome back! Last week, we solved the problems of the world. Well, ok, maybe not, but we did come up with a doable solution to attack homelessness. If you missed that blog and would like to catch up, click HERE.

Once in a while, I like to lighten the mood and post something personal that I think others might relate to. This week is that week. I would like to note that the picture featured in this week’s blog is that of my dear husband, David Tate, when we were young and in love…but were too shy to actually tell each other that. This is one of my favorite pictures of him.

It’s that time of year…all the high school reunions are in full swing, and this year was my turn. I’ve been out of high school for FORTY years. I about died when they told me.

Now, I’m not generally the type to attend these things. The people that I wanted to keep in my life from those years are still around. My social media page lists a full 167 of them, some I’ve known since kindergarten. It’s mind-boggling, really. We call each other “lifers” and indeed we are.

This year, however, brought with it a tour of our old high school, and even though I’ve lived in this town for most of my adult life, sans a year in NYC, I haven’t been back since the day I graduated and my curiosity got the better of me. Some day I’ll learn, but that day wasn’t the day.

I started planning days in advance. What to wear, whether or not to put make-up on, sandals or dress shoes, the list went on and on…hair up or down, spray tan? Adult diaper in case I sneeze? You get the picture, in fact, I imagine you’ve been there, and if you haven’t then don’t worry honey, your time is coming.

I had it all planned out. That same week, I got up in the middle of the night to use the restroom and decided to take a flashlight with me. As I finished washing my hands, I looked in the mirror and I did a really immature thing, and put the flashlight under my chin, pretending I was at camp getting ready to tell a ghost story. Welp, I got a scare alright. What were all of those hairs doing on my chin?! When did THAT happen?!

In a panic, I shut the bathroom door so I wouldn’t wake my husband up, and I turned on the light in the bathroom. I couldn’t see them. Maybe it was a light trick? Just to be sure, I turned the flashlight back on. Land HO boys, there they were! Lined up on deck as if they were sailors coming in for shore leave.

I got out the tweezers and tried to pull one of them out. Oh my stars and garters, that hair was rooted deep. It had been there since the Reagan Administration, and it wasn’t going without a fight. I opened the cabinet back up and searched for a heavier version of tweezer. That tweezer did the job, but it felt like I was removing muscle tissue as well. It HURT! As my eyes watered and my nose dripped, I yanked them all out, one by one.

Some of those hairs were reaching for my collarbone, they were so long! Where has my husband been this entire time? Scared to tell me? Slacking off in his duties? Gentlemen, it is your JOB to tell us if we have something in our teeth, or our blouse is inside out, if we have some foreign object coming out of our nose, or if that dress we think we look amazing wearing is too tight. Regardless of the responses you get, we expect that much loyalty from you. Chin and upper lip hairs are at the very least worth an honorable mention.

I finished pulling out all of the hairs, and just to be extra cautious, shaved my face and neck. I then made it back to bed and laid there, waiting for his alarm to go off so I could tell him what had happened while he slept like a baby.

I spent the rest of that week anticipating the high school tour, satisfied that all my bases had been covered. I even bought a new tube of mascara since I’m pretty sure they grow bacteria after ten years or so.

On the day of the event, we took off for our normal Saturday morning breakfast at the local cafe. It was going to be super hot that day, around 100 degrees, which for our area was a bit too much. We talked about what we were going to do that day, ruled out any outdoor work, such as weeding, and decided to head to a local air-conditioned store to buy my husband some shoes.

Do you know what we didn’t talk about? The tour at the high school that we had forgotten about.

As we pulled up to the stop light that would put us on the road to the freeway, my husband says, “Wait…isn’t today the tour?”. My heart turned over. No. It’s tomorrow, right? Isn’t today Friday? I looked at my cell phone and my stomach got involved in support of my heart and it turned over as well. Nope. It was today. In about forty-five minutes, to be exact.

No make-up. No nice shoes. No cute outfit. My hair was in a sweaty messy bun, and there was no time for fixing any of it. We were either going to go as is or we were going to be no shows.

I sat there, trying to find a reason to go. I really did want to see the high school. Did I actually CARE about anything any of them might think of me? Surely some people I love and who love me will be there to have my six, right? I finally decided that if nothing else, I had a clean-shaven chin, and that was worth showing off. Plus, I’m happily married. It’s not like I’m hoping to get a date out of the deal, right?

I suddenly became acutely aware of the bat wings under my upper arms and felt vulnerable having not covered my arms with that cute top I had picked out. It had quarter-length sleeves, and it was critical to my plan. I anxiously pulled out my hair tie and fluffed up my frizzy mess of locks, then clicked on the camera feature of my cell phone, flipped it to selfie mode, and obsessively looked for any more chin hairs I may have missed.

We were to meet “at the flag pole” to start our tour, and as we pulled up, we saw only one or two other vehicles. I was already starting to feel better. As I exited the car, I saw her. One of my lifers. Running towards me. Excited to see me. Arms out for her hug. My heart jumped for joy! She raced into my arms and we hugged so long that our husbands told us to break it off.

The group at the flag pole grew, but not by much. There were maybe 25 of us, and not one person gave me a side-eye. Nobody cared what I looked like. I got hugs and “how ya been” from several people, and I mused over the fact that despite our grey hair and extra pounds, we were a dang good-looking class. The class of ’82 had held their own. I was proud of us.

For the most part, the high school didn’t have any air conditioning running, and the hot day felt a little hotter given the circumstances. Many of the girls commented on my sundress and wished they had worn one as well (ironic), and as the sweat dripped down my neck I regretted taking out that hair tie.

I couldn’t recognize most of the building due to new construction, but I got to see the stuffed cougar in the entryway, and familiar names on the wrestling hall of fame plaques that hung high on the wall in the weight room.

At the end of the tour, we gathered at the new cougar statue in front of the school for a picture. I was thinking how nice it had been, seeing everyone, and how all of us had matured. Gone were the cliques and nasty attitudes. There were no jocks vs stoners, just old classmates who had learned that we are all the same. And just as I finished my “we are all so mature” thought, a male classmate behind me bet another male classmate $100 if he would “put his ‘manhood’ in the cougar’s mouth” for the picture.

I guess some things will never change, and there’s also a bit of comfort in that.